Welcome to the Deck Doctor Site 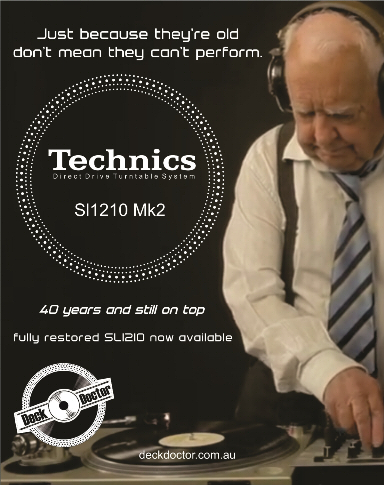 Yes its been close to 40 years since its release. Last year it was decided to bring out a new model, yes lovely but pricy $1600 each, most DJs I know had no problem with the SL1200 mk2 dubbed "The Middle Class Quartz Direct Drive for a cost of $849 each. Next year will be 40 years since the SL1200 mk2 was released and still doing what they were made to do, play records. It also came to my attention Sony Music Entertainment (SME) has revealed that a reissue of the 1978 album “52nd Street” by American singer-songwriter Billy Joel will be one of the first releases pressed to vinyl later this year as a part of the company’s return to the analog format after a near three-decade hiatus. On Thursday, the company said that “52nd Street,” for which Joel won two Grammys will be released on vinyl on March 21st 2018.  A renaissance for analog music has emerged in recent years,

The market in Japan growing to roughly 10 times what it was in 2009, when about 102,000 albums were shipped, according to the Recording Industry Association of Japan.  In 2015, the industry shipped 662,000 copies on sales of 1.175 billion yen, roughly 3.5 times that of a decade before. What I have noticed that since the introduction of Serato and traktor they have become more popular and thinking that Panasonic might have been a little silly stopping the standard model. I must admit i loved seeing a dj working records, see him or her sweating, slowing with the finger on the platter or turning the spindle trying to speed it up, fiddling with the pitch fader trying just to keep it in beat, and you listening to hear if they have it in sync. Its an art. Even today with Serato, even if he never changes the record you can still see when its coming to the end. All jokes a side with the new technology and the use of turntables you get the best of both worlds, unlike cdjs you really never know if there mixing or just having you over. Without mentioning names early this year a well known DJ come from the UK, no not with a big box of records and no not with a load of cd's but 2 usb sticks, and one of those was for back up. One has to ask why come at all as I am sure you listening to a mega mix thats been made up, perfect mixing and the guy standing there like its a walk in the park.  By reading the above you can assume that I adore the Technics and love my records. I am sure as the audiophiles of the 70s that today have their SME arms, Acoustic Signature Turntables and Valve amps worth fortunes.. I will just have 2 Technics SL1200s and a great mixer.

I am rebuilding the website at the moment , so a lot of the pages will not be available, but if you need any help just drop us a line or give us a ring . ;-)
CONTACT